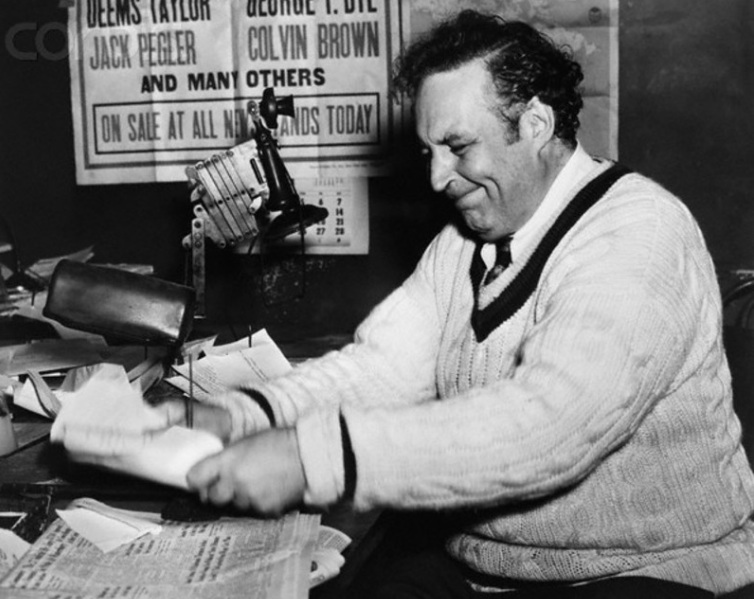 Heywood Broun on Being Fired in the Spring, Summer, and Winter (Summer is Best)

March 1, 2022March 1, 2022 by Kevin Fitzpatrick
This is one of the very last columns that Heywood Broun ever published. Broun ran his own bi-weekly newspaper, Nutmeg (later called Broun’s Nutmeg) in Stamford, Connecticut, where he resided. It was in operation in the late 1930s, and was concurrent as he wrote a syndicated column “It Seems to Me” for Scripps-Howard and organized the Newspaper Guild. After his contract was allowed to lapse in late 1939, he moved to the New York Post. He only had one column appear in the paper, as he succumbed to pneumonia on December 18 at age 51. This column was written ten days before his death.

It happens suddenly. On a Tuesday, perhaps, you’re sitting around kidding back and forth in the City Room and maybe growing reminiscent about some story you covered quite a long time back. Yes, that’s the way it was. It gave an opening to a young squirt reporter and he said, “Uncle Heywood, how did you like Jenny Lind’s first concert?”

Now naturally I never saw Jenny Lind but I did ride in horse-driven buses on Fifth Avenue and I saw Admiral Dewey come parading across Washington Square and we all hollered because he had won the Battle of Manila and made America a world power.

Everybody got to calling me Uncle Heywood and at the drop of a hat I could be induced to talk about Matty and the old, old Giants. And when the mood gripped me I would even go back to the days of Dan McGann. You can always spot an old newspaperman by his tendency to talk and write of things in the past. Every one of us will insist that they don’t grow fighters like Fitzsimmons any more.

There isn’t any set time for becoming an old newspaperman but around fifty is the dangerous age and at fifty-one the line is definitely marked as the groove on the floor of the Alamo.

I’ve been fired in the Spring, the Summer and early Winter. I like it best in the Summer. Three times in thirty-one years isn’t so much to be fired. The first firing is often worse than the last. It’s very discouraging to get canned when you’re young. That’s the way it was with me. I was twenty-one and working on the Morning Telegraph. My stall in the old Eighth Avenue car barn was right next to Bide Dudley. He was getting $35 a week and my salary was $28. I wanted $30 but when I asked for it they fired me.

The next job was a long time coming. Fortunately I was a man of character and living at home and so I didn’t go into insurance or business but just borrowed money from my father and sat around for six months doing nothing. Eventually Burdick gave me a job on the Tribune.

He was a shy city editor and when he mentioned the salary he didn’t want to pronounce the fatal words. He gazed away off at a distant window and wrote on a piece of scratch paper $25. Newspaper work is like that. You can go perfectly straight down once you are over the top of the mountain but detours are necessary as you come up from the valley.

As a matter fact it was a mountain which made me. Burdick gave me the Tribune job on the strength of a recommendation from Fred Pitney, his star reporter. Pitney remembered that when I covered the E. H. Harriman death watch for the Evening Sun, I had crawled up through the woods at Arden and come right to the door of the big house. Getting there didn’t get me anything but a boot from the butler. Still after a year and a half Pitney remembered me as an energetic young man. I’ve seen that hill since and now I couldn’t walk it let alone make the grade on my belly.

Pretty nearly ten years went by before I got fired again. The World did it. I had gone onto the paper on my own volition and through the seductive influence of Mr. Swope.

The Sacco-Vanzetti case has something to do with it but only indirectly. First of all I went on a one-man strike because they said I wasn’t to write about the case anymore. They didn’t disagree with my opinions but they objected to violence of language. “Is Harvard to be known hereafter as Hangman’s House?” Was the sentence which made the trouble.

At the end of six or seven months the good shoemaker and the poor fish peddler were dead and things were patched up for me to go back to the paper. Getting fired was something of a surprise. Being bereft of topics I dashed off a little masterpiece for The Nation saying that I thought the editorial policy of The Morning World was a shade on the timid side. I believe I said, “The World on numerous occasions has been able to take two, three, or even four different stands with precisely the same material in hand. So constant were the shifts during the Sacco-Vanzetti case that the paper seemed like an old car going up a hill.”

Naturally I didn’t expect the editors to like it but after all The Nation isn’t so big and umbrage wasn’t in the scope of my vision. Blithely on the way home I bought a morning paper but I only looked at the sport page. Arriving home I was asked as I came in the door whether or not I had read The World. “Sure,” I replied, “Yankees win, Giants win, Dodgers lose.” Those were the old, old Giants.

“But have you seen your own page?” my wife persisted.

And so I was. There in my old spot was a box explaining that Mr. Broun had been dropped on account of disloyalty. I did object to the word a little because the casual reader would hardly know whether I had robbed the till or sat on the editor’s hat.

Still it was Summer and I was full of energy and I went around opening my shirt to show my scars and having a fine time in general. And presently I got a job with Scripps-Howard which lasted eleven years. This ran out in the Winter.

Since Nutmeg is a publication which belongs to what the Parisians wittily call “Le Presse Confidentiale,” or French to that effect, I think I may reveal that the farewell conference with Roy W. Howard passed off in entire peace and amity.

He said, “I’ve talked it over with my associates and we’ve decided not to make you an offer. It would be just too much grief. The price of newsprint is going up and we think the place to cut expenses is among the high price specialists in order to protect the run of the mine reporter.”

“Roy,” I said (all Scripps Howard executives are known by the first name even to the humblest employee), “I can’t possibly make any squawk about that because I’ve made that same speech myself at dozens of Guild meetings.”

And so we shook hands and had a drink and everything was very pleasant. But I still think it is better to be fired in the Summer.

For more about Heywood Broun and his newspaper career, be sure to get a copy of The Algonquin Round Table New York, A Historical Guide (Globe Pequot Press).